What’s the deal with #Hashtags?

Hashtags. You see them everywhere on the World Wide Web – on Facebook, on Twitter, on Instagram. But what is it about those little icons that make them so widely used, and more to the point, what do they actually do?!

Well, the social media gurus at Boxed Red HQ are here to demystify the cryptic hashtags, so that you can use them with confidence in your marketing going forwards.

First things first, what is a hashtag?

As its name suggests, hashtags are a user-generated tagging system, allowing users to organise and categorise their posts by subject matter and allows searchers to easily find content with a specific theme. Designed specifically to “aid the process of content discovery and optimisation”, hashtags can be embedded throughout any social media post using the easily recognisable “#” icon to highlight the relevant keywords.

The easiest way to think of hashtags is that they do to social media what Search Engine Optimisation (SEO) does to Google – in short, they make content so much easier to search for and engage with.

Where did hashtags come from?

First entering mainstream consciousness thanks to the micro-blogging social media site Twitter as early as 2007 (yes, really – over 10 years ago!), the hashtag has now made its way across all major social media channels including Facebook, Instagram, Pinterest and Tumblr, and has now even infiltrated the likes of YouTube and Google+.

It’s been well documented that the idea of Twitter hashtags was first floated by former Google and Uber designer Chris Messina in 2007 as a way of tagging topics of interest and grouping them all together. Once known as a humble “hash”, little did anyone know that this keyboard icon would become a symbol of the social media era…

Why do we need to use hashtags?

Well, the short answer is you don’t need to use hashtags, but it definitely helps – research shows that Instagram posts with at least one hashtag averages 12.6% more engagement than posts that don’t have any (which, in our opinion, tells you everything you need to know!)

To use my earlier metaphor, the best thing to do with social media is act like they are search engines – and what do you do with your website content? You optimise it for search engines. And that’s exactly what hashtags do; they’re a way of optimising your social media content for search, making sure the relevant content is delivered to relevant audiences who are searching the exact keywords you have hashtagged.

Can you give an example of a post that ticks all the #boxes?

There’s really no right and wrong when it comes to hashtags, but there are a few best practices to adhere to in order to make sure your content is properly optimised (and, most importantly, doesn’t alienate your audience!).

One bugbear for a lot of social media users is people or companies who use hashtags too much (for example “#So #Happy #Its #Friday #Ready #For #The #Weekend”) – Hashtagging every single word is unnecessary – and rather annoying to boot! – so try and use hashtags for relevant keywords only.

Another thing to bear in mind is that you should always keep your hashtags short and snappy – stick to one or two words in a single hashtag, otherwise you could end up in a bit of a sticky situation, as singer Susan Boyle can wholeheartedly attest. Back in 2012, SuBo and her PR team tried to promote the launch of her new album with an inventive hashtag #susanalbumparty, but instead she memorably ended up causing hilarity the world over as people misread the hashtag as something MUCH ruder – and nothing to do with an album party!

So, with these nuggets of wisdom in mind, below is an example of just one of Boxed Red’s Instagram post that uses hashtags to incorporate relevant terms that people might be searching for (and that relate to the picture we posted!) 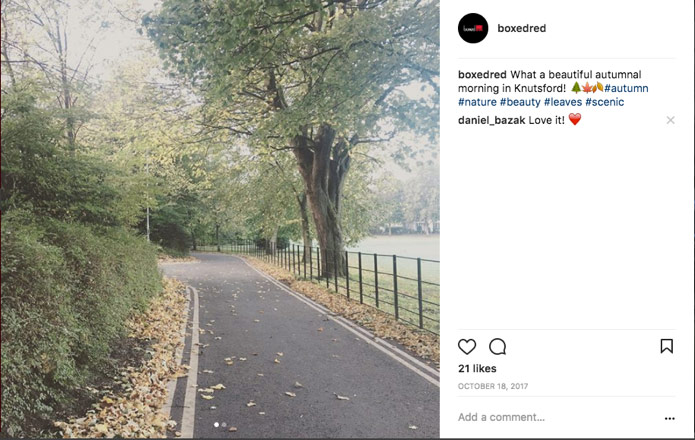 And to finish, give us some fun facts about hashtags:

And there you have it – a quick guide to social media hashtags. However, if the notion of hashtags has still left you #flummoxed, why not contact the experts at Boxed Red? We’ve had years of experience navigating around the labyrinthine world of social media, and we know our hashtags from our metatags, so you’re in safe hands!

For social media know-how without all the confusing jargon, get in touch today! “