As times change, so does the world of marketing’s strategies. Society are becoming more and more demanding on how they want to see their favourite products being marketed, and the competition is heating up! But, there are of course some legendary campaigns that have been etched into our brains; some that spark nostalgia, some that are too relatable to admit, some that have made us laugh til we cry, and some that make us so proud to work in the marketing industry! With just 11 sleeps to go until Christmas Day, here is Boxed Red’s top 11 genius marketing campaigns of all time.

Not only does this campaign show how powerful brand communication is and not just the logo, but it also tackles an issue in society where there hasn’t been enough awareness raised and not enough is being done about it. In the UK. 1.4 million older people struggle with loneliness. 225,000 often go a whole week without speaking to anyone. Cadbury donated the words from their Cadbury Dairy Milk bars to help, and this started to get people talking about the realness of this perhaps silent issue, and opened up a whole world of opportunities for the public to help too; from just going out of your way to talk to an older person, to making donations to Age UK.

In this ad from Guinness, drinkers are exhorted to knock back a big Guinness pint glass. Only it doesn’t contain the black stuff. Its content is “Guinness Clear”, which seems like a remarkably distinctive colour-free brew, but it’s actually just water. It’s all about promoting responsible drinking, but it’s clever in the way that they have totally replaced their own well-know and beloved product within their advertising with water. And, with the likes of Tom Kuntz being behind it, it’s naturally very funny.

Carlsberg – Probably not the best beer in the world

This genius campaign is damage control at its finest! Honest, responsible, and ultimately hilarious. Carlsberg admitted that its lager is “probably not the best in the world” after an increasingly negative reaction to its product and falling sales. In response to these disappointing events, the Danish brewer launched a new recipe and a very ambitious and honest campaign to win them back. The new product also featured new packaging that reduced plastic use at the company by 50%, thanks to an innovative glue technology. The value of corporate responsibility and honesty to consumers is more powerful than ever before.

Gillette – Be the best a man can be

The purpose of Gillette’s campaign was to raise awareness and challenge harmful behaviours that are often associated with being masculine, such as bullying, sexual harassment, mansplaining, and more, in an attempt to challenge the notion that “boys will be boys.” The short campaign film asked men to commit to kindness, solidarity, and common decency and definitely sparked major discussion online and a fair amount of backlash. It may have been controversial, but it’s definitely memorable!

It’s fair to say that Beer brands have been using humour forever, and adverts that are funny are often the ones most remembered. Having said that, few have accomplished what Budweiser did with a single word: Wassup? This infamous advert and campaign was first launched in 1999, yet it is still one of the most memed campaigns of the early 21stCentury. Simple, yet iconic.

Dove’s “real beauty” campaign was the game changer for beauty campaigns. Many had come before and tried to change the way beauty products had been marketed, but none of them managed to hit home like this one did. It took facts and turned them into something meaningful, and managed to create a campaigned that relevant, relatable, honest and on-brand all at the same time. In 2004, Unilever’s research found that only 4% of women considered themselves beautiful. Unilever launched the Campaign for Real Beauty and it went viral! Still to this day it’s a beautiful campaign that means more than beauty products.

To promote its new contactless payment technology, Barclaycard made a TV spot featuring a fantasy water slide. The campaign advert featured a man leaving work via a slide and passing various contactless payment sites on his way home. Not only was it creative and entertaining, the water slide metaphor worked well as the campaign’s central creative device as it suggested using a new, potentially scary technology is actually fun and fast.

Greggs harnessed the use of Social Media for the launch of their vegan sausage roll, and as a result the marketing campaign has been called “a master class in public relations” by the industry magazine PR Week. The campaign used humour to grab readers’ attention, and made no attempt to preach a vegan message. The campaign advert cleverly parodied the tone of an iPhone commercial, and PR packages of the roll were sent out to influencers dressed up in iPhone boxes, immediately becoming one of the most talked about PR packages of 2019. The campaign helped Greggs weather the worst storm to hit the retail industry in living memory.

Taking a fresh approach, This Girl Can created its Fit Got Real concept to get the message across that all exercise counts, and the campaign shows real women of different ages and ethnicities doing exercise their own way, no matter how unconventional; from running around the park pushing their child in a pram, to teaching themselves how to swim using YouTube. They used social media to get women talking about how they fit exercise into their lives, why they like it and the negative perceptions and barriers they overcame to be more active. It’s still one of the most relatable fitness campaigns to date!

Spotify have never failed to use humour in their campaigns, and they do it so well! This particular annual Wrapped ad campaign focused on crazy playlists, and its once again solidified that Spotify is a platform for discovering what the music world has to offer. The annual wrapped campaigns are highly anticipated, and are a great way for Spotify to thank their listeners for their collective impact in shaping the platform throughout the year.

This campaign saw IKEA weigh in on one of the most iconic fashion product launches of 2017. When Balenciaga unveiled their brand new IKEA blue bag “lookalike” that had a hefty price tag of $2145, IKEA couldn’t help but comment on the situation at hand, and create an entertaining tongue in cheek advert replying to the fashion brand’s launch. The advert, titled “The Original”, gave you a step-by-step guide on how to spot a fake blue IKEA bag from a real one. And, as you can imagine, the public response to this was immense. The advert was very light-hearted and caused no serious damage to either brands! 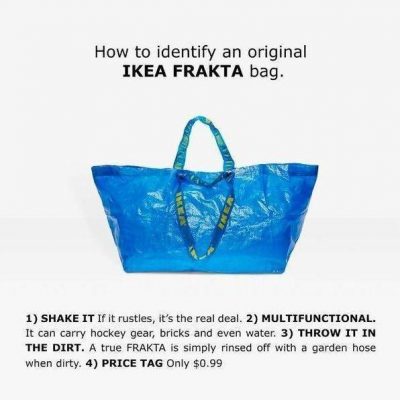 Need some creative marketing to help make your company stand out in the crowd? Get in touch with us today, and start your journey to effective digital marketing success.